During his six years on the job, NFL Commissioner Roger Goodell has levied a multitude of fines on players across the league, for infractions ranging from illegal defensive hits to drunk driving arrests, human growth hormone abuse, and more. No other commissioner in major sports history has collected the enormous dollar total in player fines as Goodell. Now it turns out, Goodell’s has been collecting all this money to go and buy himself a boat.

“Isn’t she a beauty?” Goodell said, pointing to the 57 foot, single cockpit sailing vessel. “Three double staterooms. Shock mitigating seats. Hydraulic steering. She sure is sweet, ain’t she? I’m calling her, ‘Miss Fine and Dandy.’ Get it?

“I really wanted the French leather option for the cabin seats, but it didn’t look like I could afford it. Then (Vikings LB) Jasper Brinkley made helmet to helmet contact on (Detroit WR) Calvin Johnson. Cha-ching. $15,000 fine. I called the dealer and told him, ‘throw that soft French shit in there!’”

While he is thrilled with the purchase, Goodell told reporters that yacht ownership does come with its own problems.”

“Do you have any idea what it costs to dock one of these babies?” Goodell said, while wiping down the hull with a soft cheesecloth. “Boarding fees at any of the better marinas are outrageous. But hey, that’s what playoff fines are for, right?” 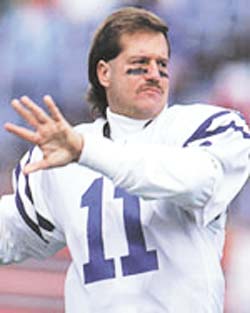