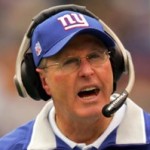 Hi there. How are you? My name’s Tom. Tom Coughlin. It’s nice to meet you. I’m sorry to get directly to the point like this, but unfortunately it’s getting late here on Monday afternoon, so I’m going to cut right to the chase:

How would you like to play running back for a professional football team? Yes seriously! What do you mean, “when?” I mean right now! Kickoff is in just under an hour so there’s no time for us to waste!

What’s that? Oh, haha, yes, I guess this is all happening kind of quickly. Okay, I can give you a little explanation, but then we really need to get moving if we’re going to make it there by gametime.

Okay, well, you know how sometimes you can make plans for something, and you think you have everything figured out? But then you find out that the thing you thought you had all figured out isn’t really figured out at all, and suddenly all your plans fall completely apart? Okay, well suppose the “thing” is a professional football team, and suppose the “plans” are your primary offensive scheme, which is dead in the water without a power running game to keep defenses honest.

I’ve lost you? Do you by any chance follow the NFL? Oh, well it stands for “National Football League.” So I take it you’re not a fan then? No, no, that’s okay. Not a deal breaker at all.

Well you see, I had a roster of what I thought were pretty effective players at what we call the “halfback” or “running back” position. Those are the fellows that carry the “football” down the “field” so we can score “touchdowns” and win “games” so as not to get “fired.” Anyway, during what we call the “offseason,” one of my backs, a young man named Ahmad, left to join a new team because they wanted to pay him more money. But at the time I wasn’t concerned because we had another youngster by the name of David who we had very high hopes for. He was what we called a “first round draft choice,” which basically means that he came VERY highly recommended. He’s young, talented; fast, strong. The whole package. But unfortunately he just WON’T. STOP. FUMBLING.

What? Oh, it’s when you drop the ball during a game. It’s a bad thing, trust me.

So this David fellow was quite a disappointment, and now because of a back injury, he’s unavailable to play for me anyway. We’ve tried out other men to use at this”running back” position. For exmaple, we had a guy named Da’Rel, but then he got hurt too. We even brought back an ex-employee named Brandon, and he looked surprisingly competent, but now guess what? He’s injured also!

What’s that? Well yes, I suppose it can be a dangerous position to play. But don’t worry; I’m sure you’ll be just fine.

Now we do have another fellow. A grizzled old veteran named “Peyton” whose name is ironic for reasons I won’t bore you with at the moment. But he’s getting up there in years, and we’re going to need more than just him if we’re going to win our first game tonight.

Oh didn’t I mention that? Yes, we haven’t yet won a game this season. How long? Oh the season’s about seven weeks old now. Well yes, itÂ is unusual to go this long without a win, and frankly it’s a bit of a sore spot, so if you don’t mind I’d like to just skip right past that part.

Anyway, we’ve arrived at the point where you come in. With your relatively healthy body and your compartively fresh legs, I think you’ll be a great choice to start for us at runnning back tonight. Hmm? Oh, don’t worry. It’ll be easy. A young man named “Eli” will talk to you in something called a “huddle” and tell you exactly what to do and where to go on each play. Oh, and that reminds me, you look pretty fast, which is good because you’re probably going to be chasing down people we call “defenive backs” with something called “interceptions” three or four times during the game.

So we’re agreed? You’ll help me out tonight? Terrific! Glad to hear it. Quickly now, time’s a’wasting. Let’s head over to the equipment room to get you fitted for a helmet, shoulder pads and jersey. And again, thank you so much for filling in like this at the last second. You won’t regret it, Ma’am.