NEW YORK – Cowboys QB Tony Romo shocked the sporting world today when he revealed his true identity as “AnToNio,” an abstract conceptual artist whose ten year career in the NFL has been one long performance piece titled, “Failure.” 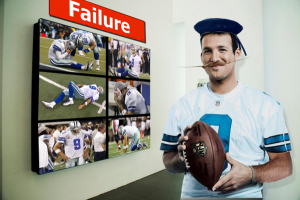 “With this piece, my intention was to make a statement on the true nature of competition, expectation, and ultimately, disappointment,” AnToNio said at his Greenwich Village gallery in Manhattan, where clips of the faux-quarterback’s most well known flubs and turnovers played on loops in video monitors while the Beck song, ‘Loser’ played in the background. “Here, for example, in the chapter of the piece titled, ‘Playoff-Snap-Drop-07,’ we see the juxtaposition of the joy mankind experiences when about to win a playoff game, contrasted with the agony of having that victory lost with the drop of a routine field goal snap.”

“That portion of the piece is one I’m especially proud of, as it truly capture the raw essence of Failure,” added AnToNio.

Critics have hailed the work as a seminal achievement in performance art, and many have anointed AnToNio as the new king of the genre.

“In the spirit of other classic performance pieces such as Christo’s ‘The Gates,’, Kaufman’s ‘Tony Clifton,’ and Marv Levy’s epic ‘Super Bowl Quadro-Fail,’ AnToNio has made his mark on the art world with this masterpiece,” said Peter Schjeldahl, art critic for The New Yorker Magazine . “Creating a work like this, which has been ten years in the making and has thoroughly subverted fans’ expectations worldwide, is nothing short of brilliant. This will be a tough act to follow, but there are rumors that a brilliant new artist named the Great Cutlerinski has been developing a work for the past several years titled, ‘Douchebaggery.’ I can’t wait to see how that one turns out.”