ATLANTA – Following a 30-28 loss to the visiting New York Jets that dropped his Falcons to a disappointing 1-4, legendary TE Tony Gonzalez has issued a demand through his agent that Atlanta immediately trade him to the 5-0 Kansas City Chiefs, it was reported early Tuesday. 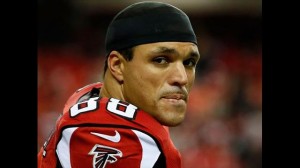 “I’ve always treasured my time as an Atlanta Falcon,” said Gonzalez in a statement. “But at age 37, and with time rapidly running out on this, my final season, I desperately want to know what it feels like to play for a winner, just once in my career.”

Gonzalez, who had 10 catches for 97 yards in the loss, has reportedly grown weary or the “losing culture” in Atlanta.

“Listen, no one can possibly accuse me of not being loyal,” Gonzalez claimed. “I bleed Falcon red, and I will always consider Atlanta my home. But the opportunity here is just too perfect: I’m winding down a Hall of Fame career, and find myself mired on a team hopelessly stuck in a losing spiral. The Chiefs, on the other hand, are a true Super Bowl contender at 5-0, but clearly need help at the TE position. And the Falcons can use the draft pick they acquire to begin the rebuilding process. It’s an ideal situation for everyone.”

In related news, the Tampa Bay Buccaneers, in hopes of jump starting their offense to shake off their 0-4 start, are reportedly in trade talks with the Minnesota Vikings to acquire 5th year QB Josh Freeman.