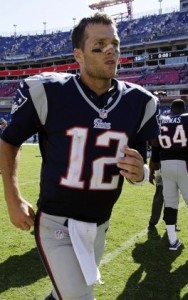 I think I looked pretty sharp during those first two quarters. 12-18, and 2 passing TDs. Yep, I think things are going pretty good for the old Tommy Gun.

So I wonder if I have time to rub one out during halftime?

I should be able to squeeze in a quick jerk-and-groan, right? I mean, Coach Belichick will do his usual “blah-blah-you-guys-gotta-focus-more” bullshit for four or five minutes. I’ll have to meet with Coach McDaniels to talk about our second half strategy for another three minutes. Applying a fresh layer of my imported Arabian seaweed hair gel so that I look nice and tousled for the camera should take another four minutes. That leaves me with, what, a full two minutes? Yeah, I can definitely Jack my beanstalk in two minutes.

Okay, just gotta close this bathroom stall nice and tight. No one mind me, I’m just in here pinching a growler! Okay now, let’s see who gets to take a spin on my mental stripper pole today.

Hey, what about that cute blonde cheerleader? The one who keeps saying, “Give me a ‘D!” Oh I’ll give you the D all right, sweetie. Just come over here and… aw crap. That’s right. She was chatting up Wilfork yesterday after practice. Now I have shirtless Vince Wilfork on the brain. Okay, who else?

Ooh, I know. Ryan Tannehill’s wife. That hot minx is as soft and dainty as the Dolphins’ defense. Okay little lady. Lemme show you what a REAL QB can do… dammit. Thinking about Tannehill’s wife makes me think about Tannehill, and I can’t maintain wood while that floppy armed fumblebum is in my head.

Shit. This is taking way longer than I thought.

Oh man, I can hear them all heading out to the tunnel now. Who’s that calling my name? Is that McDaniels? Okay Coach, I’m coming. I mean, not literally. I wish I was because then I’d be… just hang on, okay? I’ll be there in a minute.

Gotta keep trying. Getting so close here. Almost ready to paint this stall white. Just a little more. A little more. Who’s it gonna be? Halle Berry! Yes! Gotta love the classics, right? But no, because then I just think about “Catwoman,” and that makes me think about how that was the shittiest movie of all time, and now I’m limp again.

Shit. I just jerked off to Betty White.