NASHVILLE – In a long-expected move, the Titans released former pro bowl RB Chris Johnson early Friday morning, clearing over $4 million dollars in salary cap space while simultaneously losing the only player on their roster that anyone has ever actually heard of, according to fanbase sources from the league’s 31 other franchises. 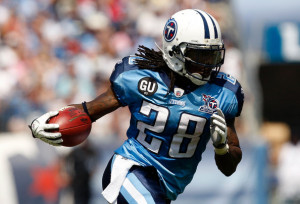 “I was surprised to hear the Titans let Chris Johnson go,” claimed Chicago Bears fan Dominic Montelli, 32, of Danforth, IL. “I guess now they’ll have to rely on their other players, um… wait, don’t tell me. They have a receiver who’s been arrested a bunch of times, right? Blackmon, or something? No wait, that’s Jacksonville.”

“It’s going to be weird to watch the Titans play without seeing Chris Johnson,” added Dolphins supporter Amanda Benson of Kendall, FL. “Not that I watch Tennessee play anyway. But if I did, it’d be weird, you know? I guess now when we think ‘Tennessee Titans’ instead of thinking about Chris Johnson, we’ll think about… well, they must have some other players I’ve heard of, right? Oh yeah, Kerry Collins! Shit, no, he’s been retired for years.”

In a press conference earlier today, the Titans explained their reasoning behind the release of the six-year veteran RB.

“We greatly appreciate the contributions made by Chris Johnson to our team, and wish him well as he continues his NFL career,” said Titans G.M. Ruston Webster. “But we chose to release him today because we felt it was time to focus on developing the many other talented players on our roster like, um, let me see, I think we have a tight end that’s kind of famous, right? Oh and that safety, the one who injures all the Patriots players. Don’t we have him too? Bertrand something? Wait, let me Google the words ‘Titans’ and ‘roster’ to see who we have. There must be some names I recognize, right?”