Hey, does anyone remember back in February when I wrote that I was retiring “NFL QBs on Facebook,” but that the rest of the site would be continuing with new material?

Well, it turns out I’m a damn dirty liar. 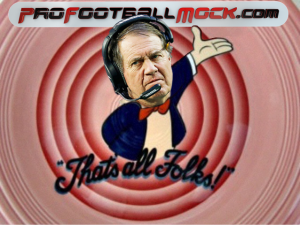 As you’ve probably guessed from the almost complete lack of updates since the Super Bowl, I’ve decided to pull the plug on ProFootballMock. Why? Well the short answer is, ’cause I’m lazy. The less short answer is that, as the new season approaches, I just don’t have the energy or inspiration for another year of publishing.

Don’t get me wrong. Operating this site for the past three years has been a blast. I’ve really enjoyed poking fun at all the successful, talented players in the NFL, as well as the ones on the Browns. (BECAUSE THE BROWNS AREN’T VERY GOOD, YOU SEE.) But honestly, I’m pretty spent, and I’d rather wrap it up now and preserve my happy memories of the site rather than allowing it to become a daily burden that I dread. This way, I’ll have a lot more free time during the season to sit and watch my fantasy teams suck ass.

I want to say a big, very sincere thank you to all the readers of ProFootballMock. I am so grateful to everyone who visited the site, read the convos or articles, shared the links, corrected the typos (so many typos!), commented, retweeted, or bookmarked any of this stuff. It’s very flattering to me that anyone would take the time to read some of the silly nonsense that I wrote, and I appreciate it very much.

I’m going to leave the site up as an archive for a while, in case you’re ever really bored and want to read a QB convo from 2012 or something. And if anyone ever wants to say hi, drop me an email at pfmstaff@profootballmock.com.

Thank you all again so much for supporting the site the past few years. I hope you all have a wonderful time watching the 2015 NFL season. PFM OUT.