Free agent WR Terrell Owens, 39, cut by the Seattle Seahawks during training camp prior to the start of the 2012 NFL season, lamented all the damage he could have done to the surprise playoff team if he hadn’t been released, it was reported Thursday. 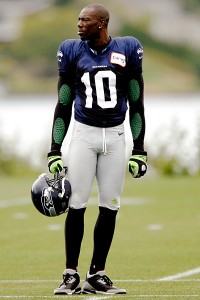 “It breaks my heart to think about it,” Owens told reporters. “I look at the way the Seahawks have been playing lately. Double digit victories. A road playoff win. Cohesive, team-first philosophy. I could have prevented all of it from occurring if they’d just kept me on the roster.”

During previous stints with San Francisco, Philadelphia, Dallas, Buffalo and Cincinnati, the talented but tempermental Owens developed a reputation as a team chemistry killer, who frequently shattered the confidence of whatever unfortunate quarterback happened to be not throwing him the ball often enough for his liking that season.

“Russell Wilson is a perfect example,” Owens continued, referencing Seattle’s starting quarterback. “He’s a rookie, but he’s out there playing like a ten year veteran, leading the team to comeback victories, remaining cool under pressure. Man, just give me one game in a Seahawk uniform and I would’ve had that kid sobbing for his mama and asking to be traded. Damn. If only, if only, you know?”

Though a return to the NFL seems unlikely, Owens holds out hope that he could still return to a playoff team in need of wideout help.

“Oh man I’d love to get a game or two in with someone like Green Bay, or Denver. And of course, New England remains the ultimate dream. You know, messing with the psyches of guys like Jeff Garcia, Donovan McNabb, and Tony Romo, that’s all well and good. But I’ll always regret not having the chance to corrupt the big boys like Brady, Manning and Rodgers. When you’re a showman, you want to strut your stuff on the ultimate stage. Throwing Peyton Manning or Tom Brady under a bus? That would have been the ultimate stage.”

“Ah well,” Owens concluded. “I guess I’ll just need to be thankful for the locker rooms I did tear apart, rather than live with regrets over the ones I didn’t.”