FLOWERY BRANCH, GA – Offseason free agent acquisition Steven Jackson was over two hours late to today’s start of Atlanta Falcons training camp, an absence the tenth year running back attributed to not having any gas left in his tank, sources reported early this morning. 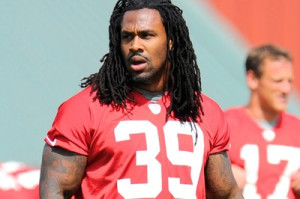 “I’m really sorry I wasn’t here on time,” the visibly winded RB explained to head coach Mike Smith, while holding his knees and panting deeply. “I just… thought that I had some gas left in my tank, but apparently my needle’s completely on ‘E.’ Seems I’ve been running on fumes for a while now and didn’t even know it.”

Jackson went on to explain that his motor, which was once described as being “nonstop,” was clearly breaking down and lacked the power and drive it once had.

Additionally, he claimed between strangled breaths, there didn’t seem to be much tread left on his tires.

“I guess I should have seen this coming,” the thirty-year old veteran concluded while gingerly limping to the team’s practice field. “This is what happens when you invest in an older hot rod. You hope that it’s as fast and reliable as it ever was. But eventually, it’s gonna stall out on you. And you’re just asking for trouble if you think some beat up old clunker is gonna get you where you want to go.”