CHICAGO – Bears coach Marc Trestman, widely expected to be fired next week after his team’s disastrous 2014 season comes to a close, spent the entire 15 minute halftime of yesterday’s 20-14 home loss to the Detroit Lions by attempting to convince Chicago players and coaches to become part of his “network” in the Amway multi-level marketing corporation, team sources confirmed today. 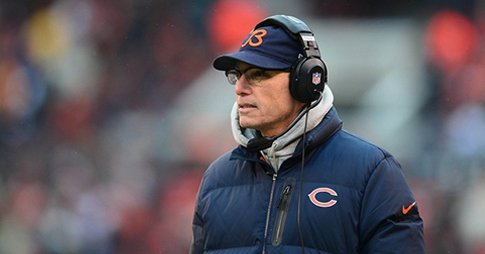 “This is an incredible business opportunity, and because I care about you guys, I want you all to join me in getting rich the ‘Amway way,’” Trestman said to his team, many of whom were still breathing heavily from the strain of their first half play. “After your initial investment into the company, you can then go and convince all your friends and family to become Amway representatives as well. And the beauty part is, you’ll get paid for every product they sell! If you look in this catalogue, you’ll see that Amway offers a wide variety of household goods and services that people use everyday, so selling products is not going to be a problem, I guarantee you!”

Added Trestman, in response to a question from DE Jared Allen, “For the last time, no it is NOT a pyramid scheme! Why does everyone think… look Jared, trust me, it’ll be like we’re printing our own money here. You just gotta have some faith, okay?”

Trestman, whose future NFL prospects appear bleak as a result of his team’s disappointing 2014 effort, continued his sales pitch right up until the beginning of the second half.

“Look fellas, football is a fun game and all. But it’s a game that only lasts three hours. What I’m offering you here is a lifetime of financial security for you and your entire family. Now who’s going to be the first one to sign up? Forte? How about you Alshon? Please don’t make me beg.”