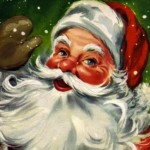 Ho ho ho everyone! Merrrrrrry Christmas! Is everyone ready for the big day? My elves and I are almost done putting the finishing touches on all the special presents we’ll be delivering to good little boys and girls across the world next week. Yes sir by golly you betcha, we are going to make this year’s holiday season the happiest, jolliest, most wonderful Christmas ever!

Certainly not like that one back in 1968, when all those dickhead Eagle fans threw snowballs at me. You remember that shit? What a bunch of fuckers!

I mean, there I was, just visiting their shithole of a stadium to try and spread a little holiday cheer. I’m a Niners fan myself, but hey, I don’t discriminate. When it comes to sharing the Christmas Spirit, I’m happy to show up at any NFL stadium. I wasn’t expecting to get blasted by thousands of tightly packed little slushbombs chucked at me by drunken maniacs.

Oh, I’d heard the stories. I’d been told that Eagles fans are mostly foul tempered, violent sociopaths, and that out-of-towners should definitely avoid going anywhere near them on game days. But foolishly, I thought to myself, “C’mon Kris. They’re not going to give you a hard time. You’re Father Christmas, for Christ’s sake.”

Holy crap, was I wrong.

The minute I hit the field, waving to the stands and ho-ho-ho’ing my way out to to midfield, BAM, I got nailed in the teeth by one of those missiles. I was like, “WHAT THE FUCK WAS THAT?” I’m standing there, with a load of wet, dirty snow dripping down my beard and into my collar, looking around to see who was responsible so I could stick my big black boot up their ass. And suddenly another snowball hits me. Then another. And next thing I know, an icy cold snowlocaust of carnage starts raining down all around me. Dozens of those freezing grenades were smashing into my face, my ears, my nuts, everywhere. And as I’m about ready to shit my big red overalls in fear, I slowly become aware that all those ugly green-jerseyed sons a’bitches up in the stands were BOOING me. You believe that shit? Tell me, what kind of fucked-up, soulless hellhole of a city actually boos SANTA CLAUS?!

Well needless to say, I hightailed it right the fuck out of there, and the reindeer and I double-timed it back to the North Pole toot sweet. And I may have been a chilly motherfucker on the outside, but inside I was BOILING WITH RED HOT RAGE at all Eagles fans everywhere.

“But Santa,” you may be asking. “Do the actions of a few bad apples really represent an entire fan base? Just because a handful of drunks threw snowballs at you doesn’t mean that the entire Eagles nation is bad, does it?

YES. YES, IT FUCKING DOES.

Those slush-chucking scumbags have RUINED it for everyone. You think the fact that the Eagles have never won a Super Bowl is a goddamned COINCIDENCE? HELL NO. I have enormous pull with every major religion’s god of luck, from ancient Greece’s Fortuna to the Seven Lucky Gods of 15th century Japanese folklore, right on through to the big JC Himself. And I’ve seen to it that every Eagles season from now until the end of time will end in nothing but FAILURE AND HEARTBREAK. THAT’LL TEACH YOU TO AMBUSH KRIS KRINGLE, YOU PUNK ASS LITTLE BITCHES.

So every year around Christmas, when you hear NFL announcers make the same old references to Philadelphia as the city that once booed Santa Claus and pelted him with snowballs, you now know that shit is 100% true because you’re hearing it right from the head Jolly Old Elf himself. And yes, Eagles faithful, once again you can expect nothing in your stockings but chunks of black coal seasoned with just a dash of reindeer shit. SUCK IT, PHILLY.