SAN FRANCISCO – Just hours after news broke that Ray McDonald, already accused of domestic battery earlier this season, was now under investigation from Bay Area Police for new sexual assault charges, San Francisco released the troubled defensive end, saying, “Someone who is as obviously violent, hateful, and criminally inclined as Ray McDonald has no place on the 49ers roster now that, you know, we’ve been eliminated from the playoffs and all.” 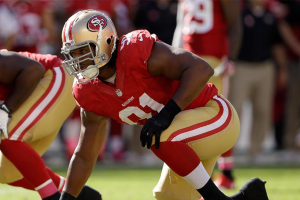 “This accusation against Ray McDonald, coming as it does during a time when we are no longer eligible for postseason play, has left us with no choice but to cut him from our team” said 49ers General Manager Trent Baalke. “Let me assure everyone that we have an absolute zero-tolerance policy toward any player that behaves in such a despicably anti-social manner as this, while not providing any playoff-push value to the squad.”

McDonald had previously been accused of punching his pregnant fiancée earlier this year, and the 49ers were roundly criticized at the time for allowing the eighth-year defender to remain on the team’s active roster despite the despicable allegation.

“That situation was totally different,“ insisted Baalke. “Those accusations against Ray came when our season was just about to kick off. Playing as we do in the run-heavy NFC West, we certainly couldn’t be expected to suspend a key member of our defensive line while we still had hopes for a division title. What’s that old legal saying? ‘All suspects should be considered innocent until proven guilty, unless said suspect’s employer has been mathematically eliminated from post season competition.’ right? I think Thomas Jefferson said that.”