NEW ORLEANS – In an effort to simulate the intense crowd noise they are likely to face this weekend at Seattle’s CenturyLink Field, the New Orleans Saints invited nearly 80,000 screaming Seahawks fans to attend today’s morning practice session, according to official team sources. 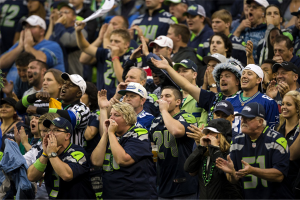 “We know that Saturday’s game is going to be a challenging one for us, due to the extreme volume level that their home crowd generally creates,” said Saints coach Sean Payton. “So at great expense, I’ve chosen to prepare our players for the noise they’re going to have to deal with by going straight to the source and bringing in a full stadium’s worth of Seahawks fans, 97% of whom had to skip out on Algebra class to be with us here today.

When asked why the team didn’t opt for the easier solution of simply piping in false crowd noise via an audio CD, TE Jimmy Graham simply replied, “What? Sorry, I can’t hear a thing. Goddammit, why are those assholes still screaming? It’s a timeout, for Christ’s sake!”

The experiment was not without complications, however.

“In retrospect, selling beer to the fans in glass bottles and cups probably wasn’t the best idea,” added the guard, just before ducking a 16oz glass bottle being thrown at his head.