NEW YORK – Angered by what he called the division’s, “clear lack of discipline and control,” NFL Commissioner Roger Goodell suspended the entire AFC North division for the 2014 season, sources close to the league office confirmed this afternoon. 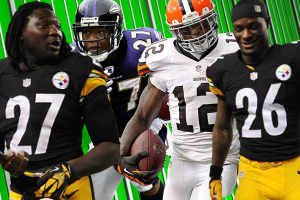 “In light of the recent marijuana arrests of Steelers running backs Le’Veon Bell and LeGarrette Blount, plus the repeated substance-abuse and drunk driving issues of Josh Gordon, plus The fiancée punching issues with Ray Rice, PLUS whatever the hell Johnny Manziel was doing with that rolled up dollar bill in the bathroom of that night club, I have decided to get right to the root of the apparent problem and bar the entire AFC North division from league play for one full year,” said the commissioner, who then added, ‘Suspend ‘em all, and let God sort it out,’ is my motto.”

Reminded that none of the high-profile arrests he mentioned included any Cincinnati Bengals, the commissioner replied, “Yeah, but come on. It’s the Bengals. You just know that Pac Man Jones is probably off shooting heroin somewhere with Vontaze Burfict right now.”

According to Goodell, a plan is already in motion to compensate for the division’s vacancy on the NFL schedule.

“We’re going to split the AFC South into two new divisions,” said Goodell. “The Colts and Titans will now make up the AFC North-Central, and the Jaguars and Texans will comprise the AFC South-West-ish. That’s not exactly a perfect representation of those team’s geographical locations, but hey, that’s never stopped us before, right?”