WASHINGTON – Robert Griffin III, whose 3-7 Redskins will face off this Sunday against the 6-4 49ers, held a press conference early Tuesday to explain in detail all the reasons why his teammates, rather than himself, will be responsible for the upcoming loss to San Francisco. 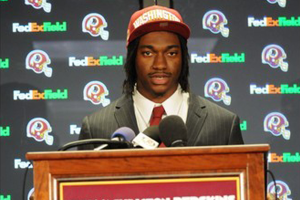 “Look, I can’t win games if my teammates aren’t doing their jobs correctly, which I assume they won’t be doing in our loss this Sunday,” said Griffin. “Success takes 53 guys working together, instead of just one talented, handsome quarterback surrounded by 52 lazy slackers dropping passes, missing blocks, and running bad routes, which are just a few of the many mistakes that I’m sure the other guys on my team will be doing this weekend.”

Added Griffin: “Plus, many of them try to shift blame and point fingers at others when I call them out, and I despise that kind of behavior.”

Multiple reports have stated that Griffin has alienated his teammates and frustrated his coaches with his unwillingness to take responsibility for the team’s struggles.

“Absolutely not. Nothing could be further from the truth,” said Griffin. “I’m the first one to say that I am partly at fault for our poor season. Maybe I haven’t chastised my teammates clearly enough to inspire them to victory. Maybe I haven’t publicly pointed out their shortcomings loudly enough, or often enough. Whatever the case, I know I can be better at those tasks, and I vow to help my teammates as much as I can by reminding them of all their failures this entire week, right up to and including our loss to San Francisco, which of course they will be responsible for.”