FOXBOROUGH, MA – Roger Goodell levied a $20,000 fine today against Patriots TE Rob Gronkowski for wearing a custom-made beer can helmet that the NFL commissioner described as a “clear violation of league uniform protocol, as well as an affront against simple good taste.”

“I tried to tell the refs it was just Gatorade,” said the two-time Pro Bowler, slurring slightly. “But they didn’t believe me. I think the red and white cans that said ‘Budweiser’ may have tipped them off. Or the fact that I passed out on the thirty yard line during a TV timeout.”

“I mean, what am I supposed to do?” continued Gronkowski, after an extended belch. “They’ve already cut me off from beer sales in the stadium after halftime. So I guess I’m expected to just go a full three hours without even one single brewski? What am I, a camel?”

The notoriously party-loving Gronkoski claimed the fine is just another example of Goodell’s power-mad approach to league discipline.

“It’s getting so you can’t even keep track of all these random rules the league keeps making up,” he lamented. “First they tell me, ‘No jello shots in the huddle.’ Then it’s ‘No vodka pong on the sideline.’ And now, I can’t even wear a good old fashioned beer helmet to wet my whistle between plays? How is that not protected by the collective bargaining agreement? Man, our union reps suck.” 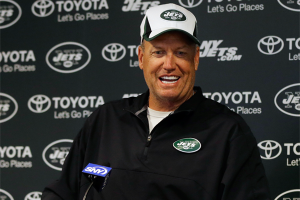