MIAMI – With a bloodthirsty cry of “Viva la resistance,” Lauren Tannehill, wife of Miami QB Ryan Tannehill, staged a violent coup early this morning and seized control of Dolphins headquarters, taking dozens of frightened coaches and players hostage while her embarrassed looking husband shuffled along sheepishly behind her. 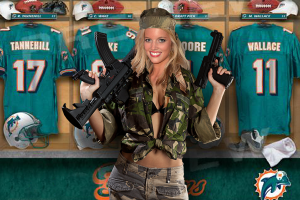 “Citizens of Miami. The revolution has begun,” the blonde haired, green eyed Tannehill said on a pre-taped message delivered to local news outlets shortly after the siege began “Today begins a new chapter in Miami Dolphins history. No longer will the tyrants and the despots force you to settle for mediocrity. No longer will our city watch helplessly as draft pick after draft pick is squandered away. No longer will a team whose success could really help boost the modeling career of a player’s spouse be allowed instead to miss the playoffs time and time again. Effective immediately, I declare myself, Lauren Tannehill, the team’s new general manager, director of player personnel, and Emperor for life. All hail Queen Lauren!”

Earlier this week, the 26-year old Tannehill, reportedly left an automatic AR-15 rifle in the trunk of a rental car at the Ft. Lauderdale-Hollywood International Airport. After being discovered by a subsequent customer, the rifle was returned to the rental company, who then delivered the weapon back to Tannehill, unwittingly supplying her with the final piece of her revolutionary plan

“We deeply regret returning Ms. Tannehill’s rifle to her yesterday,” said Mehrdad Memarpouri, president of E-Z Rental Car, Inc. “Had we known this deadly assault weapon would be used for her illegal, bloody conquest of the Miami Dolphins franchise, we certainly would have asked her to fill out some sort of form first.”

As FBI and S.W.A.T. officials surrounded the Dolphins compound, the 32-25-31 Tannehill issued a series of demands.

“By my executive order, I hereby decree that Richie Incognito will be reinstated to the Miami roster and named head of team security and military operations,“ said Tannehill while numerous linebackers and safeties trembled fearfully behind her. “Furthermore, I declare the traitor Jonathan Martin to be immediately incarcerated in our newly remodeled team dungeon, without benefit of trial. There he will join Joe Philbin, Jeff Ireland, and all the other incompetent enemies of the state whose pathetic reign of failure has finally come to an end.”

“Lastly, I demand that fifty million dollars of salary cap space be provided to the team in small, unmarked bills, to be used on a free agent spending spree of blocking fullbacks, quality ball carriers, and effective red zone receivers. Maybe then SOME people will finally finish in the top five of QB rankings so that their beautiful wives can get that sweet modeling contract with Calvin Klein that she’s had her eye on for two years now.”

“These are my demands, Miami, and they are non-negotiable,” concluded Tannehill with a flip of her golden hair. “You have one hour to comply, or so help me I will leave a trail of bloody practice squad players from here to South Beach. DO NOT FUCK WITH ME.”