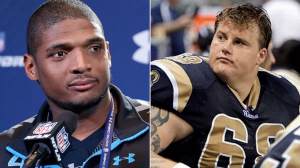 “Hey Coach Fisher? It’s me, Richie,” Incognito reportedly said to Rams coach Jeff Fisher during a mid-afternoon phone call. “I played with you guys until 2009. Yeah, before your time, I know. Listen, I heard you guys just drafted that (slur) Michael Sam, and I assume you just did it for a goof or whatever. So here’s an idea: sign me to a one-year deal immediately and I’ll kick his (expletive) ass for you.”

Added Incognito: “Also, find out for me if he has a sister. I’ll totally threaten to shit on her. That’s kind of my calling card, y’know?”

Sam, who now becomes the NFL’s first openly gay player, would seem to be a poor mix with the volatile Incognito, whose history of bullying Martin included physical intimidation, financial extortion and personal attacks of a racial nature, Incognito, however, insisted that he has learned important lessons about tolerance from his past transgressions.

“Oh yeah, I’m a whole new guy,” Incognito said moments after hanging up the phone. “See, back then I was pushing Jonathan around, calling him an (expletive), insulting his manhood. I just did it for fun, because he wasn’t really gay. And I know now that was wrong. But this Michael Sam kid, he actually IS a homosexual, you see, so clearly he’d deserve whatever beatdown I put on him.”

“I explained all this to the Rams, and they said ‘absolutely not.’ But between you and me, I think they’re just trying to be tough negotiators. Trust me, I expect they’ll call me anytime now and beg me to come wedgie the shit out of that Sam kid. Unless, you know, they’re all a bunch of little (expletives) that is.”