Pope Benedict XVI, who stunned Roman Catholics worldwide when he announced his resignation as the head of the church on Monday, will be joining the FOX NFL Sunday crew as an in-studio analyst for the 2013-14 seaon, it was reported Tuesday. 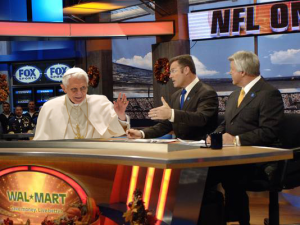 “The Holy Father brings a unique and insightful voice to the FOX family, as well as a surprisingly encyclopedic knowledge of the NFL and its players,” said executive producer Ed Goran. “I know he we will fit right in with Howie, Jimmy, and the gang, and I’m greatly looking forward to the contributions he will make to our award winning Sunday broadcasts.”

The outgoing Pope, who will replace Terry Bradshaw, has long considered himself as a devout student of American football, and his blog, “Benny and the Jets,” has been a go-to website for NFL fans since its launch in 2007.

“Obviously, we’ll miss Terry, and we thank him for his contributions through the years,” said host Curt Menafee, “But with Pope Benedict, or ‘PB’ as I’ve nicknamed him, the show will have the opportunity to expand into new and exciting directions.” Added Goren, “We intend to use His Holiness on a number of new features, including ‘Papal Infallibility,’ in which he’ll be telling us not only who will win the upcoming games, but precisely how many yards each player will gain in each contest. There’s also going to be PB&J,’ where the Pope and Jimmy Johnson will debate the day’s hottest issues. And of course, he’ll be joining funnyman Rob Riggle for a weekly feature we’re calling, ‘Mass Hysteria,” in which our two wild-and-crazy guys will quiz average churchgoers around the country with questions like, ‘Name the Seattle Seahawk who led the NFL in receiving yards in 1985,’ and ‘Name the student of John the Apostle who was martyred when his flesh was torn apart by ravenous lions at the Roman Colosseum in the year 108 A.D.”

“The answers are, of course, Steve Largent and Saint Ignatious of Antioch, respectively,” concluded Goren.