CYBERSPACE – The official website for Dallas Cowboys QB Tony Romo, www.tonyromo.com, has been chronically shutting down and crashing on its web visitors on a maddeningly consistent basis, and according to numerous reports, always seems to struggle and fail at the most inopportune moment possible. 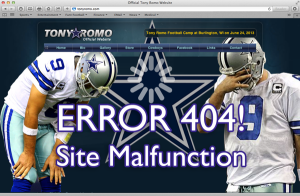 “I went to the ‘gallery’ section of Tony Romo’s website, to see some photos of him in game action,” said web-surfing Cowboys fan Jillian Lorrigan of Beaumont, TX. “So I clicked on a large photo, and I get this status bar: ‘10% downloaded, 20% downloaded, and on and on, little by little, as the picture slowly starts to come into view, then with just 5% left, the stupid site crashes my browser.”

“I tried again, with a bunch of other pictures, and every time, same result: TonyRomo.com performs great right up until the very last minute, then it screws up royally somehow. I mean, I can understand an occasional error. Even the best official NFL quarterback websites mess up sometime. But Romo’s site seems to melt down it in every single pressure situation!”

Most observers agree that the site operates extremely well about 90-95% of the time, and is even seen as one of the most efficient and impressive of all the official websites owned by various NFL starting quarterbacks. However, it has also become apparent that when the site does happen to glitch, crash, or otherwise malfunction, it always seems to be at the worst possible moment.

“I was trying to buy an official Tony Romo jersey,” lamented Sonny Craggs of Boise, ID. “So I go through the whole process: I pick my size, XL, and choose the “road-blue” color option. Then I enter my name, shipping address, email address, phone number, credit card info and so on. Shipping speed? UPS Ground. Gift wrapping? Nope. So finally, FINALLY, I hit the ‘submit order’ button, and goddammit, the stupid site send me to an error page that reads, ‘Whoops – looks like TonyRomo.com is temporarily unavailable – please try your request later.’ And I’m like, ‘Son of a BITCH! Did it really have to crap out like that right at the moment of truth?’”