FOXBOROUGH, MA – As the New England Patriots prepare for Saturday’s playoff game against the Indianapolis Colts, head coach Bill Belichick was elevated the intensity level of his team’s Friday morning practice by using the terrifying powers of the dark side of the Force to punish underperforming players, sources reported early today. 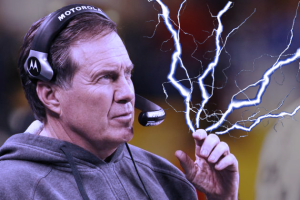 “[Safety Devin] McCourty lost track of the ball on a crossing pattern and missed a tackle,” explained OT Nate Solder. “And coach just lifts his hands and launches wave after wave of blue electricity into Devin, making him writhe and scream in agony on the turf. And the whole time, he’s all, ‘you have paid the price for your lack of vision!’ It was as if all of his hatred and anger was given tangible form in the lightning leaping off his fingertips and pouring into Devin.”

“Plus he seemed especially frail and corpselike today,” added Solder.

Friday’s incident was not the first time Belichick had been accused of tapping into the dark side. In November he was widely criticized after allegedly using the Force to asphyxiate WR Aaron Dobson for dropping several passes and showing what team sources called “a disturbing lack of faith.” According to sources, Dobson had provoked the telekinetic strangling by confronting the coach about his “sad devotion” to his “sorcerer’s ways,” but Belichick released Dobson from his evil grip only when Patriots owner Robert Kraft intervened.

Some league insiders felt that Belichick’s affinity for the power of the blackness of his heart made manifest is nothing surprising.

“This is how most dark Jedi in the NFL behave,” said NFL Network analyst Mike Mayock. “The hatred, the anger, the quickness to inflict pain and suffering at potentially lethal levels on subordinates…some may consider it unnatural, but it’s pretty normal when you let anger and hate control your destiny. Why, I heard just the other day that Andy Reid threatened to feed Marcus Cooper to the Sarlacc. It’s not unusual at all.”