ATLANTA – After an inordinate amount of instant replay reviews during the first half of Sunday night’s Falcons-Patriots game, many observers have begun to openly speculate that head referee Walt Coleman and the rest of his officiating crew are using any excuse they can think of to sneak under the replay hood for 5-10 minutes at a time in order to watch the series finale of AMC’s Emmy Award-winning drama, “Breaking Bad.”

“It seems like they were going under that hood to check something after every single play,” complained Patriots WR Julian Edelman. ‘We’d execute a simple off-tackle run for two yards, and they’d blow their whistles and announce, ‘The previous play must be reviewed.’ Then they’d all run to look at the replay monitors for another five or six minutes. And when they’d come back, I could hear them gasping ‘Oh my god,’ and ‘I never saw that coming,’ and ‘Holy crap, Heisenberg is a badass.’

“After one 8 minute delay while they ‘reviewed’ a short screen pass, I asked Coleman, ‘So? What’s the verdict?” recalled Falcons coach Mike Smith. “And he looked confused and said, ‘Huh? Verdict of what?’ I’m like, ‘Of the four-yard catch that you just reviewed for almost ten minutes?’ And he just says, ‘Oh right. The call on the field stands, I guess. Whatever.’”

“Then Coleman walked away from me and started typing furiously on his phone,” added Smith. “I swear he was on a Breaking Bad message board.”

While none of the officiating crew would confirm or deny the allegations, careful observers were able to catch subtle clues as to the group’s actions.

“Using our sophisticated, state-of-the-art replay technology, we have determined that the receiver’s toe was two inches out of bounds when he caught the ball,” Coleman announced to the crowd after yet another lengthy review, before pumping his fist and adding, “Science, bitch!” 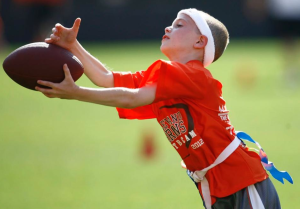 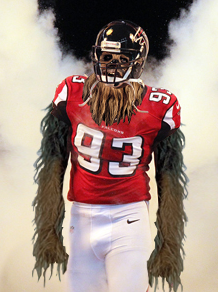