Three days after signing Joe Flacco to a historic six-year, $120 million dollar contract that made him the highest paid quarterback in NFL history, the Baltimore Ravens cut the other fifty-two players on their roster in order to lower team payroll expenses to a level beneth the NFL salary cap. 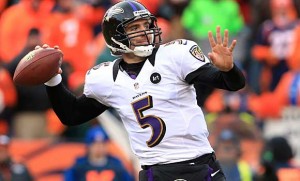 “With Joe’s contract hitting the books, we needed to make some moves to get down to a legal salary limit,” said Ravens GM Ozzie Newsome. “It’s never easy saying goodbye to quality players, but this was something that had to be done. The Ravens organization expresses our sincere thanks and wishes future luck to Ray Rice, Haloti Ngata, Michael Oher, Terrell Suggs, Anquin Boldin, Dennis Pitta, Torrey Smith… you know, maybe it’d be easier if I just read these in alphabetical order.”

Newsome acknowledged that a roster consisting of a single player would pose unique challenges to the Super Bowl champions.

“It will definitely be tough for us to head into the 2013 season without, you know, linemen and receivers and stuff,” Smith said. “Of course, we’d like to add some new talent via the draft or free agency, but Flacco’s contract limits what we’ll be able to do. But regardless of how many other players we do or do not have, the coaches have every confidence in the world that with his newly acquired mega-wealth, Joe will adapt and thrive as an offense of one.”

At press time, Vegas oddsmakers rated the team’s over/under win total for the coming season at two victories, with just the Cleveland Browns expected to still fall to the Flacco-only Ravens.