ETERNAL PARADISE – Ralph Wilson Jr., beloved longtime owner of the Buffalo Bills, passed away Tuesday at the age of 95, and was immediately greeted by Saint Peter at the pearly gates of Heaven with a pair of custom fitted angel wings, a solid gold halo, and four shiny Lombardi Trophies commemorating the dominant Bills teams of the mid 1990s, according to afterworld sources on the scene. 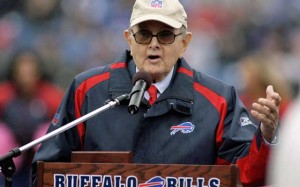 “Here you go big fella. These are for you,” said the saint upon presenting the trophies to the surprised but smiling Wilson. “We’ve been keeping these babies warm for you ever since ’95. Enjoy ‘em Ralph. You earned them.”

Wilson, whose team advanced to an unmatched four consecutive Super Bowl berths from 1990-1993, only to lose each time, hugged the trophies tightly as a look of peaceful joy spread across his face, before addressing the assembled angels and saints.

“I… I don’t understand,” Wilson reportedly uttered, still smiling. “Don’t get me wrong, I appreciate this. But we, we didn’t win those games.”

“Up here, anything is possible,” replied Saint Peter warmly. “You and the Bills not only won all four of those games, but your average margin of victory was over four touchdowns. You’re listed in Wikipedia as ‘the greatest NFL dynasty of all time.’ Congrats, big guy.”

“That was a nice moment,” Peter would later recall as Wilson carried the four trophies to his glorious sky-mansion. “He was really happy to get those Lombardis. It reminded me of the smile on (deceased Bears RB) Walter Payton’s face when we showed him the video of him scoring five touchdowns against the Patriots in the Super Bowl. It’s special moments like that that make this job worthwhile.”