VATICAN CITY, ROME – Speaking to thousands of believers from his balcony at Vatican Square earlier today, Catholic church leader Pope Francis delivered a sermon on the subject of faith versus atheism, during which the Holy Father pointed to the NFL’s Cleveland Browns as, “indisputable evidence that God our Father not only exists, but that he also clearly hates the American city of Cleveland,” according to several witnesses at the scene. 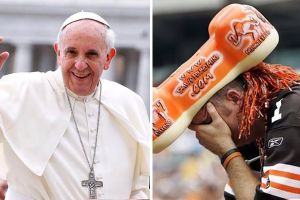 “My children, in today’s secular world, we often hear of those who have lost their way, those who question the very existence of our Creator in Heaven,” said the 77-year old Pontiff. “But today I say unto you: look no further than the wretched Browns of Cleveland for undeniable proof that the Lord truly does exist, and that He, for whatever blessed reason, utterly despises the Browns and their entire metropolitan region.”

His Holiness then continued, “I mean, come on. They’re 77-163 since they returned to the NFL in 1999. Do you know how hard it is to be that consistently bad? And now they’ve lost their only good wideout for the entire season? Not to mention this whole “Manziel” sideshow they now have to deal with for the next decade? Brothers and sisters, there can be no other worldly explanation for such a history of total failure other than a vengeful, angry God.”

“We’ve heard all of these ‘Browns versus Evolution’ arguments before,” said David Silverman, president of American Atheists. “Religious folks like Pope Francis would have us believe that an all-seeing, all-knowing, Cleveland-hating deity is the only logical explanation for an NFL team to be as cursed as the Browns. But a basic understanding of scientific principles illustrates that the Browns were not simply created awful. No, they evolved, slowly over time, into their current pathetic state, via years of terrible coaching, drafting and salary cap management.”

“I just don’t understand heathen thinking like that,” said devout Christian Sheila Carmichael, 63, of central Pittsburgh. “I know God exists. I see Him everyday in the simple beauty of a rainbow, in the joy of my grandson’s smile, and in the pleasure I get \ watching the Browns fail in new and hilarious ways, year after year after year. I don’t need proof to have faith in my Lord. Cleveland’s eternal sadness is all the proof I’ll ever need.”