Denver QB Peyton Manning, on track for one of his finest statistical seasons and a possible Comeback Player of the Year award, presented each of his offensive lineman with a sheet of coupons for Papa John’s Pizza as Christmas gifts, it was reported early Friday. 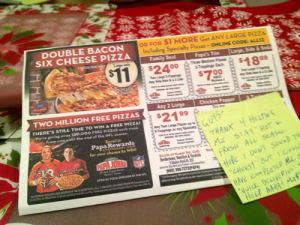 “Guys – thanx 4 helping me stay ‘hot & fresh’ all season,” Manning wrote on post-it notes he attached to each of the coupons before taping them to the linemens’ lockers. “Hope I don’t sound too ‘cheesy,’ but I couldn’t have completed all my ‘quick deliveries’ w/o your help. Haha! Merry Xmas!”

The coupons, valid at participating Denver-area Papa John’s franchises, contain such offers as “Three Medium, Three Topping Pizzas For $7.00 Each,” and “Large Double Bacon Six Cheese Pizza for $11.00.” Each coupon is valid for a limited time only, and only one offer may be redeemed per day, per customer, sources confirmed. 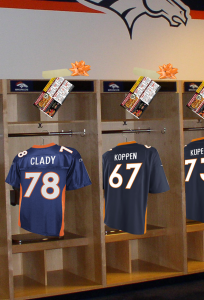 Manning, who signed a five-year, $96 million dollar contract with the Broncos during the offseason, said, “I wanted to show the guys that I appreciate the hard work and great protection they’ve given me all season long. And what better way to say that than with a sheet of fantastic discounts on selected Papa John’s pizza products as well as other assorted menu items? Sure, I could have just given them individual coupons for a one time only, $2.00 discount. But I chose instead to give them the whole sheet to make sure they know exactly how much I value their efforts.”

In a related story, multiple reports out of New Orleans have indicated that every member of the Saints offensive line discovered a six-pack of Pepsi Max in their lockers Thursday, along with a gift tag that read, “Fellas – here’s some icy cool refreshment for you since you help keep me so “cool and refreshed” in the pocket each Sunday. LOL. Enjoy! – DB”