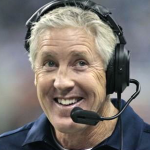 Here we go, folks. The bye week is over, and the Seattle Seahawks playoff run to glory is about to begin!

And as luck would have it, we seem to have drawn quite an easy matchup for our first game. The Carolina Panthers? Seriously, NFL? The Carolina Panthers? Talk about an easy victory. After all, there’s no way the reigning Super Bowl champions could EVER be defeated in a playoff game by a team with a losing record, right?

Yep, I think it’s safe to say that we can pretty much go an autopilot this week. Short practices, minimal film study, etc. C’mon, we’re playing a team that was sub-.500 during the regular season. I can’t recall any instance where such a team has ever won a postseason contest, can you? Certainly not against the world champions, at the very minimum.

And it wasn’t just any world championship we won, mind you. No, it was our first ever world championship. Just remember that our franchise had been a laughing stock of the entire league for a couple of decades prior to our Super Bowl run. You think that after overcoming years and years of frustration to finally win a Lombardi Trophy, we’re just going to stumble in the first round against a team that couldn’t even post a winning record in the regular season? Pffft. C’mon, that could NEVER happen.

After all, how could they possibly beat us? What, do you think they’ll build up a surprising halftime lead? Then as we attempt to come back in the 4th quarter, they’ll cement the win with a shocking, tackle-breaking, long touchdown run that people will talk about for years to come? Maybe with some catchy nickname like “DeAngelo Williams-plosion” or “Jonathan Stewart-lanche?” Please. Keep dreaming.

No, it’s think it’s safe to say that, as current NFL champions, we can pretty safely coast past a team with a losing record in the playoffs without breaking much of a sweat. NFC Championship Game, here we come!