Fourteen years after his tragic death, the ghost of legendary Chicago Bears RB Walter Payton still maintains a rigorous workout schedule in the afterlife, it was reported Thursday. 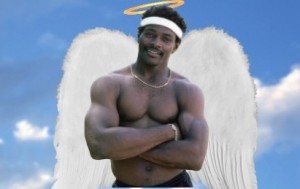 “The guy’s just amazing,” said Brian Piccalo, another former Bear. “There’s no need to diet or exercise up here. We’re all in perfect health all the time. Heck, we can sit around and play XBOX all day up here if want, eating cake for breakfast and bacon for dinner, and we never gain an ounce. Yet there’s Walter, every day, running up and down a big cloud carrying a log on his shoulders, before sitting down with a big bowl of oatmeal. And not the flavored Quaker kind either. I’m talking about that steel-cut, healthy oatmeal you buy in the organic food section that tastes like ass. It just shows you the type of indomitable spirit Walter still has.”

Payton, the longtime NFL rushing leader, was known for his exhausting workout schedules, and all signs indicate that he refuses to let something as trivial as death slow him down in any way.

That’s Walter for you,” said the ghost of former Bear Bronko Nagurski. “He never let Carl Eller or Randy White stop him back in the 70′s, and he’s not about to let the Grim Reaper stop him today. He just stiff arms that Death right in his bony face, breaks through that skeletal arm tackle, and keeps plowing forward. I tell you, #34 does more in death than most people will ever accomplish while alive.”