GLENDALE, AZ – Scandal marred the end of New England’s 28-24 victory over Seattle in today’s Super Bowl when Seattle accused the Patriots of taking the air out of the potential Seahawks comeback, as well as Seattle’s entire 2014-’15 season, according to sources close to the scene. 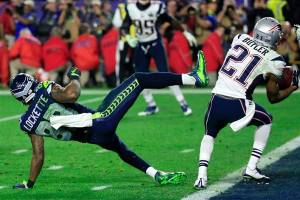 “This is an outrage!” howled a furious Seahawks coach Pete Carroll. “Those cheating sons of bitches blatantly took all the air out of our miraculous come-from-behind victory, and we have the whole thing on videotape. We made that amazing catch to get ourselves down to the red zone, got ourselves to the 1-yard line, and were prepared to complete what would have been the most spectaular comeback in Super Bowl history. And then that New England cornerback, Malcolm What’s-His-Name, intercepted Russell Wilson’s pass, which completely deflated all the ball sacks in our sideline. That has to be illegal, right? Right?”

“Do you know how pumped up we were when we thought we were going to win that game? At least 5,000 psi!” yelled Seahawks CB Richard Sherman. “Then all of a sudden, with just seconds left in the 4th quarter, all the air completely flew out of every single member of our team. Don’t you think that’s HIGHLY suspicious?”

While hoisting the Lombardi Trophy and showering themselves with champagne, Patriots officials denied any wrongdoing.

“To my knowledge, we operated completely within NFL guidelines,” said a jubilant Patriots coach Bill Beluchick. “It’s my understanding, scientifically speaking, that many things can cause the air to suddenly leak out of a football team. Atmospheric conditions, such as a the failure to properly use a BeastQuake, can be a contributing factor. Or it’s possible the air seeped out after they were roughly handled by a four-time Super Bowl champion. In any case, this is the last I will be addressing the situation, We’re on to the White House.”