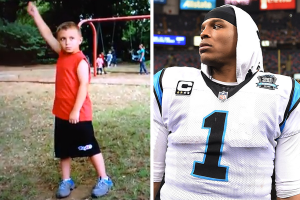 “I’ve been loosening up my arm for a couple of years now. I’m definitely ready to replace Cam,” said Nate at a team press conference. “I’ve been exercising and eating right, and getting sixty minutes of play a day just like I said I would in that commercial. Now is the time for me to complete the prophecy by becoming the new Carolina starting QB, forcing Cam to be my backup once he returns, and making Panthers fans forget all about him.”

Added Nate: “Oh, and I’m also going to be his Mom’s favorite player now too. Can’t forget about that part.”

“Everyone here wishes Cam all the best as he recovers from his unfortunate accident,” said Rivera. “But while he recuperates, we feel like we’re in excellent shape with Nate as our new QB. He’s taller than Russell Wilson, smarter than Ben Roethlisberger, and has a stronger arm than Alex Smith. And hey, if things don’t work out, I can probably trade him to the Redskins for two or three first round draft picks.”