GREEN BAY, WI – As part of their game preparation for this week’s matchup against Minnesota, the Packers have been using 62-year old Herbert Cudgelson, the team’s long time janitor, to play the part of Vikings QB Teddy Bridgewater in practice drills against Green Bay’s defense this afternoon, according to custodial sources close to the team. 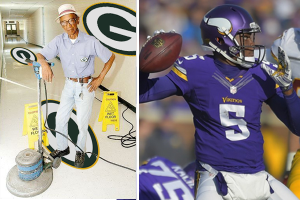 “Initially, we had (backup QB) Matt Flynn, playing the part of Bridgewater,” Packers head coach Mike McCarthy told reporters. “But after a few series, it became obvious Matt wasn’t really a good replica of Bridgewater, in the sense that he was actually completing a few passes and whatnot. So then we tried using (third string QB) Scott Tolzien, followed by (punter) Tim Masthey, and we even gave (offensive tackle) Bryan Bulaga a few reps. Again, none of them seemed quite Bridgewater-ish enough. But when I saw Herbert over on the sideline, cleaning some vomit off one of the exercise bicycles, a light went off in my head, and I yelled, ‘Hey Cudgelson! Grab some pads and a helmet. You’re going in.’”

Despite his limitations of a) never having played organized football at any level, and b) suffering from degenerative joint arthritis, Cudgelson provided a nearly flawless imitation of Bridgewater, according to practice observers.

“We lined him up under center and hiked him the ball,” McCarthy said. “He looked pretty confused, then sort of wobbled a little bit before lobbing the ball about four yards into the ground while screaming in terror. So yeah, it was just like we had a Bridgewater clone back there.”

Due to the success of the experiment, McCarthy now plans on continuing the practice by asking his team’s 13-year old ball boy to play the part of Vikings WR Greg Jennings, using the front office’s mostly female accounting staff to simulate the Vikings offensive line, and placing a fragile, easily shattered crystal figurine on the field to play the part of recently acquired RB Ben Tate.