Moments after learning his re-election was official, U.S. President Barack Obama took the stage at a rally in Chicago’s McCormick Center to deliver his victory speech, which he began with, “And to think that some people actually believed in some bullshit story that the Washington Redskins had guaranteed a Romney win. In your FACE, Redskins!” 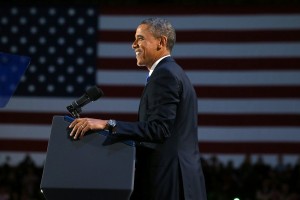 The President was referring to the “Redskins Rule,” a trend involving the NFL team that has correctly predicted the outcome of nearly every presidential election for several decades. According to the rule, when Washington wins their final home game before the election, the incumbent party retains the Oval Office. When the team loses, as they did on Sunday against the Carolina Panthers, the challenging party wins. The Redskins’ 21-13 defeat was seen by Mitt Romney supporters as a sure sign that their candidate would emerge victorious.

“Hey ‘Redskins rule,’ suck on THIS!” proclaimed the President, while grabbing his crotch and thrusting suggestively. “I worked too long and campaigned too goddamn hard to lose this frigging election on some stupid-ass urban legend. Look, you knew I was gonna win this mutha. All the polls have said for weeks that I had the electoral votes to take this thing. So if keeping that stupid ‘Redskins Rule’ myth alive was so important to you, maybe you shouldn’t have lost to the shitty-ass Panthers.”

Several states away, Mitt Romney read a much shorter concession speech to his disappointed supporters.

“This sucks. That dumbass ‘Redskins Rule,’ got me all excited, and now I’m totally bummed. Eat shit, Washington,” said Romney before flipping the bird to nearby photographers and storming off the stage.