OAKLAND – The 0-6 Oakland Raiders, whose 282.7 average yards gained per contest ranks dead last among the 32 NFL teams, were revealed today to be using an offensive playbook that consists of nothing more than assorted screengrabs from the “John Madden” videogame, printed out and scotch taped into a loose leaf notebook, according to sources close to the team. 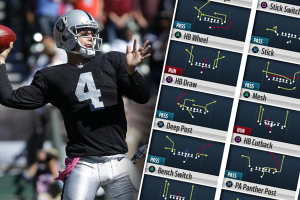 “It can be pretty confusing at times,” admitted rookie QB Derek Carr. “There are times when I drop back, and I’m looking for the big blue “X” button to appear over a guy’s head before I throw it to him. By the time I remember that’s not how it works in real life, I’ve been sacked.”

“The plays aren’t even from the current version of the game,” complained RB Maurice Jones-Drew. “They’re from, like, Madden ’06 or something. Apparently, (team owner) Mark Davis found that for five bucks at a garage sale or something, and thought he was getting us a bargain.”

“It makes sense when you think about. John Madden was the former coach of the Raiders, after all,” Sparano told reporters. “I think it’s safe to assume he personally designs and codes every single play on that videogame. So using his Raiders playbook is sort of like bringing him back to be our offensive coordinator.”

Players, however, continue to be frustrated over the approach.

“The coaches force us to memorize these really basic patterns from the video game, and it’s just not working,” said WR Andre Holmes. “When I try to tell them that in real life, opposing cornerbacks don’t just give you easy touchdowns every time you audible to a fly pattern, they tell me that it’s a ‘glitch,’ and to go try again. If this keeps up much linger, I’m going to ‘rage-quit’ this entire stupid team.”