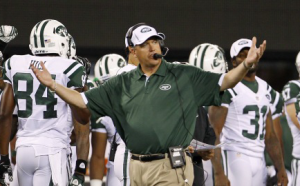 “We couldn’t believe it,” said center Nick Mangold. “When the draft was over, we were all comparing our rosters. I was feeling pretty good about my team because I got Tom Brady at QB, C.J. Spiller at RB, and Dez Bryant as my WR. Then all of a sudden, Santonio Holmes said, ‘Hey, didn’t any of you guys pick me?’ We all just kind of looked at each other and shrugged. That room was dead silent man.”

“So we all started going through our selected player lists, and sure enough, no Jets,” continued CB Antonio Cromartie. “I had the first overall pick, so I course I took Adrian Peterson. Then in rounds two and three I grabbed Aaron Rodgers and Lamar Miller. Maybe I might’ve taken (Jets RB Chris Ivory) in the middle rounds if he wasn’t injured. But there’s no one else on the New York offense that appealed to me.”

“I drafted Drew Brees in the second round as my primary QB,” said Mark Sanchez. “Later on, I was considering drafting myself in round 13 as a backup. But then I saw that Christian Ponder of the Vikings was still available, so I picked him instead. Just because, you know, his starting position is more secure.”

“Last year, I had Shonne Greene, Dustin Keller, and the Jets defense on my team, and I came in dead last,” said head coach Rex Ryan. “I’m not making that same mistake again. This year I loaded up with Peyton Manning, Ray Rice, and Wes Welker so I’m feeling real good about my team.”

Added Ryan: “Plus, I picked the Tampa Bay defense, and now that they have Darrelle Revis, they should be AWESOME. Championship, here I come!”