SEATTLE – As the Seahawks prepare to open the 2014 NFL season at CenturyLink Field against the Green Bay Packers Thursday, the NFL’s “replacement refs” of 2012 signed a one-day, ceremonial contract to officially retire as members of the team with whom they have become synonymous.

“It means so much to us to return here to this stadium, the site of our greatest triumph,” said replacements spokesperson Lance Easley. “Thank you so much for this incredible honor. It’s flattering to see our names hanging in the CenturyLink rafters with so many other Seahawks greats. Just remember: everything we did, we did for you, the Seattle fans.”

Asked to recall his favorite memory from his three week stint in the NFL, Easley paused then said, “Gosh, it’s hard to narrow that down. There were so many great moments. I guess if I had to choose just one, it would be that time I awarded Golden Tate a touchdown on that one pass that was actually an interception by the other guy in the yellow pants. That memory kind of sticks out in my head.” 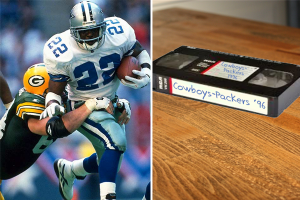