GALVESTON, TX – Referee Pete Morelli defended his crew’s controversial call, then reversal, of a crucial pass interference penalty against Dallas LB Anthony Hitchens in the Cowboys 24-20 wild card victory over the Detroit Lions as, “absolutely the right call to make in that situation,” while lounging on the deck of Cowboys owner Jerry Jones’ 200 foot luxury yacht, according to nautical sources on the scene. 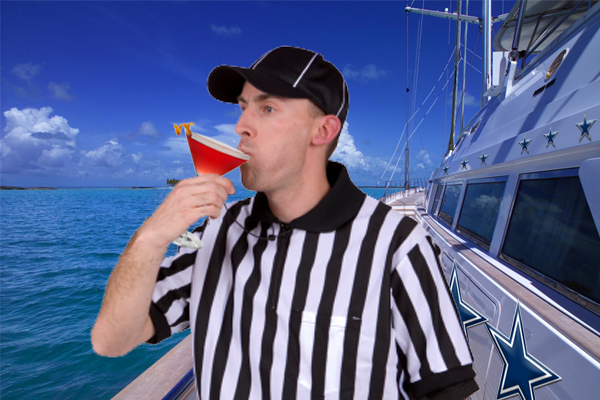 “I understand that a great many viewers, Lions fans in particular, are upset over our decision to wave off the pass interference call earlier today in the playoff game up in Dallas,” Morelli told reporters, while sipping a Skyy Vodka and red berry martini. “But let me assure you that there was nothing underhanded in that action. It was merely a case of deciding amongst ourselves that the play in question probably wasn’t really a penalty, even though we had just called it as such about a minute earlier, and even though we had absolutely no visual review or other evidence to back us up in our extremely late and highly unprecedented reversal. See? Completely normal.”

Added Morelli, to a passing waiter: “Excuse me, can you fetch me some more of those delicious lobster rolls? And a couple of Cuban cigars for later, too. Thanks.”

Morelli, whose entire officiating crew was whisked away from the game immediately after the final whistle to be helicoptered down to Jones’ extravagant yacht docked in Galveston’s finest marina, assured reporters that NFL officials work very hard to maintain unbiased objectivity during a game.

“For us, it’s all about making the correct call,” said Morelli, as two bikini-clad Dallas Cowboys Cheerleaders stroked his bare chest. “We referees can’t concern ourselves with things like which popular team the league would very much like to see advance to the next round, or which owner is massively wealthy and can afford enormous bribes, or whose personal yacht can cruise us all the way to Cancun in just 12 short hours for a fun-filled, all-expensc paid getaway at Mexico’s most luxurious resort hotel. No, we keep such thoughts as far out of our head as possible on game day. Now if you’ll excuse me, there’s a conga line forming up on C deck that has my name on it.”