EAST RUTHERFORD, NJ – A promotional event for the National Football League’s “Play 60″ foundation ended with an unexpected twist on Tuesday when a group of 10-year old boys and girls visiting the New York Giants afternoon practice took part in a full scrimmage with the team, resulting in a 28–6 defeat for Tom Coughlin and the home team, according to eyewitnesses on the scene.

“The NFL brought us to Metlife Stadium as a field trip for that whole ‘Play 60’ thing,” said local fifth grader Zachary Belden. “Eli Manning was giving us a speech about how it’s important for us to go outside to play for sixty minutes a day, and how that’s the only way we could ever become big strong athletes like him. One thing led to another, and next thing I know, I was returning an interception for a 56-yard touchdown.”

“My Mom keeps telling me that I spend too much time inside playing video games, and that I should go out in the sunshine and get more exercise,” said 65-pound Bobby Vickerson. “Boy, won’t she be surprised when I tell her that I caught 6 passes for 120 yards and two touchdowns.”

The 3-8 Giants, currently on a seven game losing streak and already eliminated from postseason competition, appeared winded as the game wore on, a fact which was exploited by their younger opponents.

“Those grownups seemed like they were awfully tired in the second half of our game,” observed QB Emily Nelson. “Right after I threw my last TD early in the third quarter, I could see all their defensive line-guys with their hands on their knees, breathing pretty hard. So we tried to be nice, and took it easy on them for the rest of the game. But they should really try to get more exercise.” 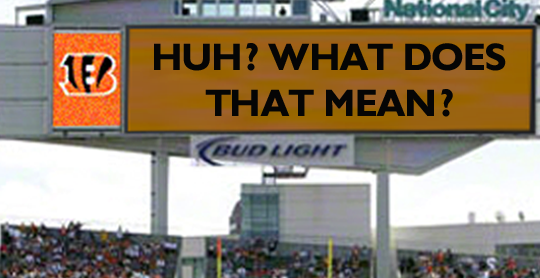 Battle Of The Boards: SAINTS-BENGALS