Taking a cue from the multitude of analysts who have mentioned the prospect in the past, the NFL announced Saturday that effective immediately, all league games will now be played strictly on paper.

“For years now we’ve heard many experts, when discussing one of our games that had a surprising result, end their segment with, “well, that’s whay they don’t play the games on paper,” said league commissioner Roger Goodell. “And we thought,’well wait a minute here. Why don’t we do that?’ It’s so simple, it’s brilliant!”

The move to paper-based games is projected to save the league tens of millions of dollars annually in player salary, stadium upkeep, travel expenses, and numerous other areas.

“It’s a simple cost-to-profit thing,” explained Redskins owner Dan Snyder. “If by playing the games on paper, we can continue to provide fans with the thrilling NFL results they’ve come to expect, without all the burden of actually playing the games, then everyone wins.”

Asked to elaborate on how the new league model would be advantagous to fans, Snyder, explained, “Well, for starters, they’ll have their Sundays free again. Now families across America can go out to the park, the beach, wherever on Sundays, and have the score of their favorite team’s game texted to them as soon as we decide what that score is.”

While details are still being finalized, the league is said to be considering a format similar to the well known “Dungeons and Dragons” board game to determine results.

“Goodell is going to be our ‘Dungeon Master,’ if you will,” said Denver Broncos owner Pat Bowlen. “Every week all us owners will meet up at someone’s house. This week, for example, everyone’s going to (Bengals owner Mike Brown)’s condo in Cincy. We’ll drink some beers, play some MarioKart on his Wii, and than we’ll all sit down and roll a few twenty-sided dice to see whose team gets to win this weekend. Later that evening, we’ll post the results on Facebook for the fans to see, along with our MarioKart results as a bonus.”

While some have criticized the move as one that will strip the sport of it’s unpredictable and exciting qualities, Goodell is confident that fans will embrace the change in time. 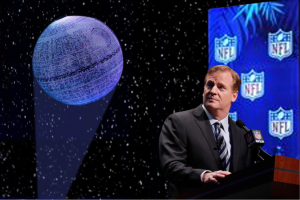