INDIANAPOLIS – Blake Bortles, Teddy Bridgewater, and Johnny Manziel, considered to be the top rookie QB prospects heading into May’s NFL draft, have all apparently been pretending to be awful whenever the Cleveland Browns’ Jon Sandusky has been watching, according to combine sources. 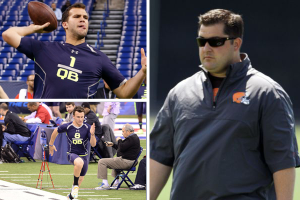 “It’s weird,” said Sandusky, Director of Player Personnel for the Browns since 2010. “Johnny Manziel is supposed to be about six feet tall, right? Well when I put the tape to him, he measured less than 5’9. It sounds crazy, I know, but I think, he was bending his knees and slumping a little.”

Continued Sandusky: “And also, everyone I’ve spoken to says that Blake Bortles had a terrific combine. They told me his mechanics were strong, his form looked sharp, and his passes were crisp and on-target. But I walked up and told him that I was with the Browns, and that with a strong showing, he might just get himself selected by us with pick number four in May. Well, right after that he proceeded to go 0-10 in his next set of drills, and somehow managed to fumble three times despite the fact that he was only simulating the snaps. “

The QB hungry Browns are reportedly intent on drafting one of the three top prospects with their first round choice, but according to Sandusky, no player has yet emerged as a favorite.

“Teddy Bridgewater didn’t want to throw at the combine, so instead I just sat and interviewed him for a few minutes,” said Sandusky. “And all he kept talking about was how great Johnny Manziel and Blake Bortles were, and how any team would be lucky to get them at pick number four. When I asked him what he himself could offer the Browns if we selected him with the fourth overall choice, he simply told me that he was a ‘terrible quarterback with lousy skills and limited upside,’ and that we’d be crazy to even consider him with our first round pick.”

“Well if he thinks he can talk us out of selecting him by telling us how awful he is, then he’s got another think coming,” concluded Sandusky. We certainly didn’t let those facts dissuade us from drafting Tim Couch, Brady Quinn or Brandon Weeden, so we’re not about to start caring abut that stuff now.”