MANHATTAN – Despite the fact that the 2015 NFL season is still a full nine months away, the New York Jets have somehow already been mathematically eliminated from participation in next year’s playoffs, according to sources within the league’s standings calculations department. 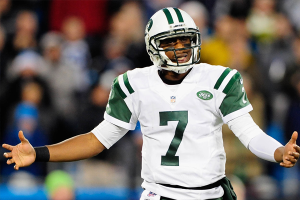 “It seems odd, I know, for a team to already be ruled out of the postseason before a single game has yet to commence,” said David Gabai, chair of Princeton University’s mathematics department, who has made other such early announcements with astonishing accuracy in the past. “But the numbers check out. The Jets, at 0–0, are currently tied with 15 other teams for the number one seed in the 2015 playoffs. But unfortunately for New York, they’re on the losing end of every single tiebreaker, including the ‘Having Geno Smith as your QB,’ tiebreaker, the ‘Being almost completely devoid of talent on both sides of the ball’ tiebreaker, and of course the ‘Just being the fucking Jets’ tiebreaker, which is the most critical of them all.”

A spokesperson for the Jets expressed disappointment at the early elimination, but vowed that the team would play hard for the remainder of the yet-to-begin season, even if the games will be entirely meaningless.

“Darn it. We had such high hopes for the season before it began. So naturally, we’re disappointed to be eliminated from the playoffs, you know, before the season’s even begun,” said owner Woody Johnson. “But we’re still going to conduct our business as usual: hire a new head coach, get through free agency and the draft, play out the string of 16 games next year, and then get our squad ready for the 2016 season, where we hope to… hang on, I’ve just been handed a note from the league informing me that we’ve already been eliminated from the ’16 playoffs as well. Goddamnit.”