MINNEAPOLIS – A new report released today from the Langdon Association For Football Studies asserts that if Tom Brady and the New England Patriots, whose 33-20 loss to the Miami Dolphins on Sunday was their first season opening defeat in a decade, were to somehow lose again this weekend in their road game against the 1-0 Minnesota Vikings, that it would be, “fucking hilarious,” and “pretty much the funniest, most awesome goddamn thing ever.” 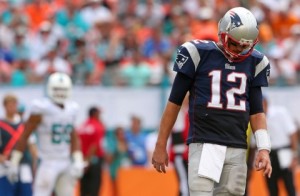 “We use a variety of metrics to determine a sporting event’s overall ‘hilarity formula,’ said LAFFS researcher Angela Freeman. “In this case, we factored in the Patriots’ high winning percentage over the past 13 years, measured against the expectations that they will be a dominant force within the AFC once again this season, then took into account the overall smugness and ‘douchability’ of their fan base. And when those numbers are crunched, the possibility of a Patriots loss this weekend to Minnesota equates to a staggeringly high LAFF rating of 178, which is literally ‘off-the-charts’ funny, or ‘fucking hilarious.’

Although Las Vegas odds makers have installed the Pats as a 3-point favorite in the game, Freeman informed reporters that such expectations only add to the team’s prospects for comedy.

“Indeed, if New England could somehow shit the bed this Sunday and, let’s say, lose in overtime thanks to a bad coaching decision or maybe an ill-advised pass that gets returned for a TD, our sophisticated hysteria-measuring equipment would have to be immediately unplugged, because modern technology is simply not capable of handling an event THAT fucking hilarious.”