NEW YORK – Ted Cottrell, the independent arbitrator chosen by the NFL to hear the appeal by Lions DT Ndamukong Suh of his one-game suspension for stepping on Aaron Rodgers’ leg during Sundays Detroit-Green Bay game, announced Tuesday that Suh’s punishment was to be immediately lifted, as Suh himself stood next to Cottrell, repeatedly stomping down fiercely on the judge’s right foot, while glaring menacingly. 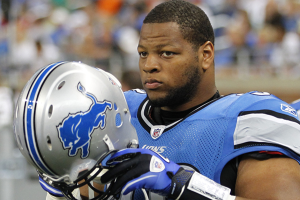 “In my considered opinion, the one-game suspension levied on Mr. Suh by the National Football League is… OW, OW!….is excessive, and should be overturned at once,” said the grimacing Cottrell, while tears of agony rolled down the 67-year old arbitrator’s face. “Mr. Suh is an outstanding defensive player and a model citizen, and Roger Goodell was clearly… OW, OH JESUS, OW!… was clearly out of line for punishing him because of a totally accidental leg stomp on that little bitch Aaron Rodgers.”

Added Cottrell: “There, I said it. For God’s sake please stop! I can’t feel my toes anymore!”

Suh, 27, has previously been penalized by the NFL for stomping on the arm of the Packers’ Evan Dietrich-Smith, kicking Texans QB Matt Schaub in the groin, blocking low against the Vikings’ John Sullivan, and leading with his helmet into the chest of the Browns’ Brandon Weeden. According to Cottrell however, his lengthy record of infractions is to be expunged at once.

“All of Ndamukong Suh’s previous violations are… OW, OH SHIT, OW! … are hereby pardoned by the NFL,” said Cottrell, while wincing at the simultaneous atomic wedgie/titty twister being applied by Suh. “Moreover, all of the money he has paid in fines is to be immediately refunded with interest, and he is completely absolved in advance of all wrongdoing for any blows to the head, piledrivers into the ribs, or kicks to the nutsack of Dallas Cowboys quarterback Tony Romo in this weekend’s playoff game. OW!”