DETROIT – While preparing for Sunday’s crucial game against the Green Bay Packers that will decide the NFC North Division championship, Lions DT Ndamukong Suh insisted that the fierce stomp he will be delivering directly into the groin area of Packers QB Aaron Rodgers sometime during the first quarter will be, “completely unintentional and not at all dirty,” sources close to the fifth-year defender confirmed early today. 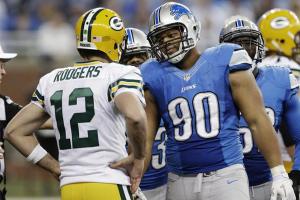 “I can assure you that the upcoming heel grind I will be administering to Aaron’s ballsack during this weekend’s game will be completely inadvertent,” Suh told reporters after Friday’s morning practice. “And frankly, I’m getting pretty sick of being called a dirty player for completely accidental attacks like this one, which will be occurring on Sunday sometime around 4:35 EST.”

Suh, who was selected to his fourth Pro Bowl this past week, was once named the “dirtiest player in the NFL” by a Sporting News poll, and has been fined a total of $216,875 over the course of his career for numerous personal fouls.

“Look, football is a violent, fast-moving game,” Suh said, while filing his metal cleats to razor sharpness. “I can’t help it if my foot just happens to smash really, really hard into Rodger’s junk while I’m in the act of tackling him to the ground just after he’s released the ball for a first down pass, preferably on a short screen when there’s more bodies around to block the referee’s view.”