In an act described by the tour manager as “the humane thing to do,” Philadelphia Eagles QB Michael Vick was banned from last night’s Pitbull concert at American Airlines Arena in Miami, Florida, sources reported early Tuesday. 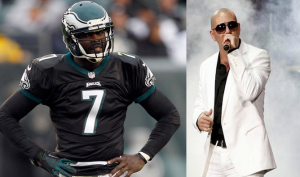 “I needed to protect myself,” commented the Cuban rapper, Pitbull. “The man’s a notorious Pitbull killer. I’m not gonna put myself in a situation where I let the dude backstage and end up electrocuted or hanged by a dog leash.”

Vick, who served time in a federal prison from 2007-2009 for crimes related to animal cruelty, commented, “Look, I killed pit bulls. The dogs. Not dudes named Pitbull. If I kill an actual guy named Pitbull, they’ll lock me up and throw away the key. Plus, I’m pretty sure that (NFL Commissioner) Roger Goodell would consider murder in the first degree to be a violation of league protocol.”

This is another in a series of incidents involving Vick and rappers, on the heels of being escorted out of The Palace of Auburn Hills in Detroit last month while attending a Bow Wow performance.