OAKLAND – Raiders QB Martt Flynn, recently demoted to third string on the team’s official depth chart, spent a portion of his nearly $400,000 weekly paycheck on an exquisite, custom made, bench upon which he can sit and watch the starters from his team play each Sunday, team sources confirmed. 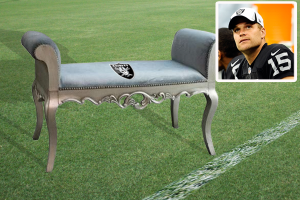 “It’s top of the line in every way. The finest bench money can buy,” said Flynn, showing off the $22,600 seat he had custom made from a luxury furniture specialist in Florence, Italy. “It’s upholstered with 100% pure Charmeuse silk, woven from the fibers of free-range Mongolian caterpillars who have been hand fed a diet of mulberry leaves and milkweed from birth. The frame was lovingly carved by a 78-year old master Italian artisan, using aged white oak from a two-thousand year old tree said to have been planted at the top of the Himalayas by Buddha himself.”

Added Flynn, “The bench was also available with feather down throw pillows, but I didn’t want to be too extravagant, you know?”

Flynn, 28, spent the first three years of his career in Green Bay, serving as Aaron Rodger’s backup. He signed a $26 million dollar contract with Seattle in 2012, but was supplanted as the Seahawks starter by Russell Wilson before the season began. In 2013, Flynn was traded to the Raiders where he again finds himself on the sideline watching starter Terrelle Pryor.

“The bench cost a pretty penny, sure,” said Flynn, whose 2013 salary is higher than that of Andrew Luck, Cam Newton, and Robert Griffin III. “But even after paying for it in cash, I still have over $350,000 left. And that’s just for this week. So I’m also commissioning a sculptor in southern France to create a solid mahogany clipboard with platinum inlays, with a pen chain forged from 24 karat gold recovered from the wreck of the Titanic. Sure it’s gaudy, but my motto is: ‘why make the money, if you don’t spend the money?’”