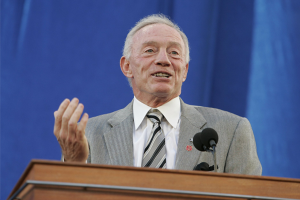 “Not just any beans. These are magic beans,” gushed the giddy Jones. “I tell you, old Jerry here really pulled a fast one on poor Bill Belichick. When he told me that he had these special beans available for a trade, and that all he wanted was our first round pick, I knew I had to act fast before some other G.M. took advantage of his foolish generosity.”

The beans, believed to be a mixture of common household chickpeas, Spanish lentils, and red kidney beans, will hep turn the Cowboys into “instant Super Bowl contenders,” according to Jones.

“Apparently, all we have to do is plant these bad boys right at our 50 yard line, and BAM, by the next morning we will have sprouted a fully grown strong side pass rusher capable of running a 4.5 in the 40 yard dash, a hard-hitting free safety with a 45.0 vertical jump and a big bodied left guard who can bench over 40 reps of 225 pounds without breaking a sweat. And all for the low, low cost of just the number sixteen overall pick? Ha! Jerry my boy, you’ve done it again.”

When reminded by reporters that AT&T Cowboys Stadium contains an artificial playing surface, which would make planting the beans an impossibility, Jones replied, “Well, duh. Obviously, we’re going to tear up our current field and replace it with 100% natural dirt and grass so that we can plant these little beauties. C’mon guys. I’m not an idiot, you know.”

Reaction around the league to the Cowboys’ bean acquisition ranged from shock and disbelief to, in at least one case, envy.

“Dammit. How the hell did we let Dallas beat us to that sweet deal?” stated outraged Redskins owner Dan Snyder. “Someone get me Belichick on the phone, pronto. Ask him if he still has that goose he told me about one time. The one that lays golden Lombardi trophies and shits Super Bowl rings. If he does, our next three first round picks could have his name on ‘em.”