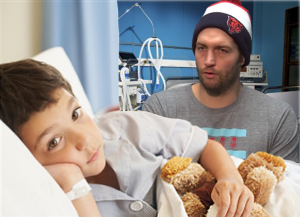 “Look at the statistics! I was the fifth most sacked QB in the league last year,” a frustrated Cutler reportedly said to Jeremy Baker, 11, who suffers from an incurable form of the gastrological disease Amoria Phlebitis. “And then people criticize me because my completion percentage was one of the lowest among starters, or that I barely averaged over two hundred yards per game. Well what do they expect when I’m running for my life after almost every snap, you know what I mean?”

Baker, who has been in and out of hospitals since he was three years old, offered encouragement to the seventh year signal caller

“Mr. Cutler kept telling me that his linemen ‘effing blow chunks.’ Except he didn’t say ‘effing,’” Baker recalled. “I tried to tell him that maybe things will be better this year on account of they have a new coach and stuff. But he just said, ‘yeah not with my luck,’ and turned away all mad. I was just trying to make him feel better.”

The visit from Cutler was arranged as a special treat for Baker, a lifelong Bears fan, who watched every Chicago game last season from his bed in the hospital’s intensive care wing.

“I was really surprised when he showed up,” Baker said. “I’d asked for Matt Forte, but seeing Mr. Cutler was cool too I guess. He gave me a Bears ball cap that was too big for me and had some sweat stains around the end. I think it might have been one of his old ones. Then he complained about his o-line for a while, and after that, his receivers and his QB coach. He kept saying that no one really understood how much his life sucks sometimes. Then he tried to light a cigarette, but the nurse made him go outside.”

“He came back later, but I pretended to be asleep until he left,” Baker concluded. “I didn’t want to be rude, but I just couldn’t listen to any more talk about how (right tackle) Jonathan Scott is slower than you-know-what. He said he was going to try to come back and visit me again next week, but I’m going to see if the hospital can just tell him that I died.”