CHICAGO – While approaching a Macy’s department store in downtown Chicago today, Bears QB Jay Cutler flicked a lit cigarette butt into the red donation pot of a bell ringing, Santa Claus suit-wearing representative of the Salvation Army charity organization, then entered the store without breaking stride, according to witnesses on the scene. 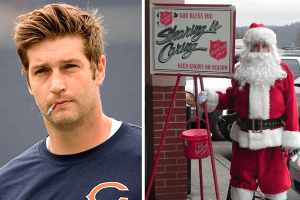 “I couldn’t believe it,” said the horrified Santa (real name Abe Cohen, 52). “That sourpussed young shmendrick Just tossed his lit cigarette in my pot as casually as could be, and strolled away without a second glance. I had several $1 and $5 dollar bills in there, that burst into flames immediately. I had to pour my entire bottle of water in there to douse the fire.”

Added Cohen: “Unfortunately, I’d forgotten that my bottle was filled with Bacardi 151, and that just made the fire worse.”

According to reports, the incident was not the only negative encounter Cutler had with a charity worker during his shopping excursion.

“I had a little ‘Toys For Tots’ booth just outside the mall, collecting donations for orphans and other underprivileged children,” said Janet Hennessay, 39. “As Mr. Cutler exited Macy’s and began walking towards his car, he grabbed a small stuffed poodle that was sitting on top of my donations pile, and before I could stop him, he said, ‘Great. Christmas shopping for both kids done. Fuck it, they can share this.’ And he was gone.”