JACKSONVILLE – Despite an 0-8 record, a twice-suspended starting wide receiver, and a roster that many analysts claim may be the worst the NFL has seen in years, the Jacksonville Jaguars have somehow managed to attain the status of “least dysfunctional professional football team in the state of Florida,” it was reported early Tuesday. 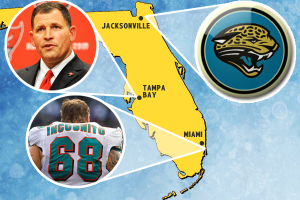 “As an organization, we’re proud to hold this distinction,” said Jags owner Shahid Khan. “While we’re aware that there are challenges yet to overcome, mostly pertaining to the act of winning games and stuff, we’re pleased to see that our efforts to create a solid, stable foundation in which our head coach does not openly feud with our quarterbacks, and our linemen do not bully or racially victimize one another, have not gone unnoticed.”

While the state’s other NFL franchises, the Tampa Bay Buccaneers and the Miami Dolphins, respectively cope with an outbreak of MSRA infections, and a locker room prone to vicious hazing, the Jaguars continue to be a model of calmness and cohesion, relatively speaking.

“You have to give Jacksonville a lot of credit,” said CNN/SI NFL writer Andrew Brandt. “While their neighbors to the south seem to erupt with new scandals almost daily, the Jags continue to lose games in a quiet, consistent fashion. They’re almost zen-like in their commitment to predictable, non-distracting failure.”

“That’s simply how we do business here,” claimed Jaguars head coach Gus Bradley. “We only sign players who we feel are even-tempered and gentle of spirit, so as not to expose our team to any Richie Incognito-type dramas. Any talent that they may have at, you know, running and catching and whatnot is purely a bonus.”