JACKSONVILLE – Despite seeing their team win its first game of the season against the Cleveland Browns this past Sunday, members of the Jacksonville Jaguars “Roar” cheerleading squad announced today that they will not be practicing any touchdown celebrations for this weekend’s game against their in-state rivals, the Miami Dolphins, sources close to the group confirmed early this morning. 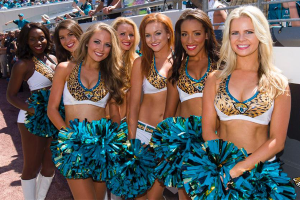 “Why bother? It’s not like we’ll be using any of those routines this week,” said second year Roar veteran Jennifer Connell. “Our offensive has pretty much been crap all year. We’re ranked dead last in the league in scoring, if you don’t count the Raiders, which of course no one does. And this Sunday we play the Dolphins, who have the 4th best defense in the NFL. So what’s the point in busting my ass all week to rehearse a bunch of moves for a lousy offensive unit that’s only averaging an NFL-worst 4.8 yards per play? What, is Blake Bortles suddenly gonna light up the Miami secondary for, like, five TDs or something? Pssh. Get real.”

“And besides, do you know how little this franchise pays us?” added squad rookie Danielle Brooke. “When you add up practice time, personal appearances, gameday performances and so on, it’s like $2.25 an hour! For that kind of measly cash, I’ll be goddamned if I’m gonna waste hours on end practicing cheers that no one’s ever going to see because the team will be going three-and-out on half their drives, and turning the ball over on the other half.”

According to reports, the cheerleaders’ pessimistic approach to game prep is carrying over to members of the coaching staff as well.

“I’ve been working my guys pretty hard this week, practicing punt coverage and kickoff returns, because we expect to spend a lot of time Sunday in those situations,” said Jaguars special teams coach Mike Mallory during the team’s Thursday practice. “But we really haven’t bothered much with kickoff coverage. What’s the point? The only way we’re going to kicking off very much is if our offense scores a bunch of touchdowns and field goals and, well…”

Mallory then looked off in the direction of the practice field to see Bortles fumble an attempted handoff to RB Storm Johnson during routine 7-on-7 drills, before concluding, “… I just don’t see that as a likely scenario.”